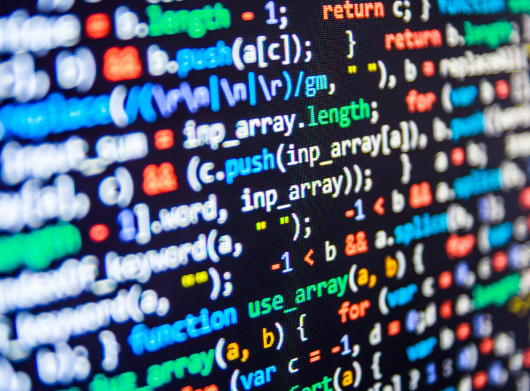 Computational thinking means thinking algorithmically and with the ability to apply mathematical concepts such as induction to develop more efficient, fair, and secure solutions.

Agent Cubes:  Agent Cubes is a programming environment that gets students started immediately with intuitive, visual, built-in programming tools. Guided by the teacher and tutorials when needed, students create characters and worlds and program their behaviors with a drag and drop interface. AgentCubes users range from elementary school students to NASA scientists, entire school districts, and large federally funded university projects. We use it to build simulations, to explore complex ideas, communicate ideas to others, or just build games.
Processing:  Processing is an open source computer programming language and integrated development environment (IDE) built for the electronic arts, new media art, and visual design communities with the purpose of teaching the fundamentals of computer programming in a visual context. One of the aims of Processing is to allow non-programmers to start computer programming aided by visual feedback. The Processing language builds on the Java language, but uses a simplified syntax and a graphics user interface.
Python: Python is a high-level programming language designed to be easy to read and simple to implement. It is open source, which means it is free to use, even for commercial applications. Python is considered a scripting language, like Ruby or Perl and is often used for creating Web applications and dynamic Web content
Teaching the Hour of Code to their peers each December: The Hour of Code started as a one-hour introduction to computer science, designed to demystify "code", to show that anybody can learn the basics, and to broaden participation in the field of computer science. It has since become a worldwide effort to celebrate computer science, starting with 1-hour coding activities but expanding to all sorts of community efforts. This grassroots campaign is supported by over 400 partners and 200,000 educators worldwide.
Code.org Discoveries. This program introduces a myriad of topics having to do with Computer Science. Students will participate in hands on activities (call "unplugged") as well as programming. Topics include: problem solving, web development, interactive games, the design process, data and society, and physical computing.
Other topics that are introduced to students are: Javascript, machine learning, internet of things, binary, thinking like a coder, logic games and puzzles, Makey Makey, Sphero, Alan Turing, Hidden Figures, soft circuits, cybersecurity.
GRADES AND ASSIGNMENTS
Parent, guardians, and students can find information about assignments, grades and missing work on Infinite Campus. That is the only place I post this information. Students are given more than enough time in class time to complete assignments. Work that is incomplete by the due date will be marked missing and will affect your students grade. If you see that your student has missing work, please have a discussion with your student about the way he/she uses time in class. Students are also advised to work on coding they are behind in at home for homework. I do not give extra credit to bring up a grade due to work that goes from missing to a failing grade. If you have any questions regarding student work, please contact me.